by gestalt73
Thomas Sanladerer has a review of the Titan where he attaches a nema 17 pancake stepper. It's a really compact extruder setup.
https://www.youtube.com/watch?v=tiAQ9slUZ58
(direct youtube embed still doesn't work)

I picked one up to play with a direct drive setup on one of my printers. Has any one tried this yet?

My fully loaded effector weighs in at 170 grams right now, and the Titan + pancake stepper is 190 grams.
So it would double my effector weight, but taken together the effector will still be pretty light. 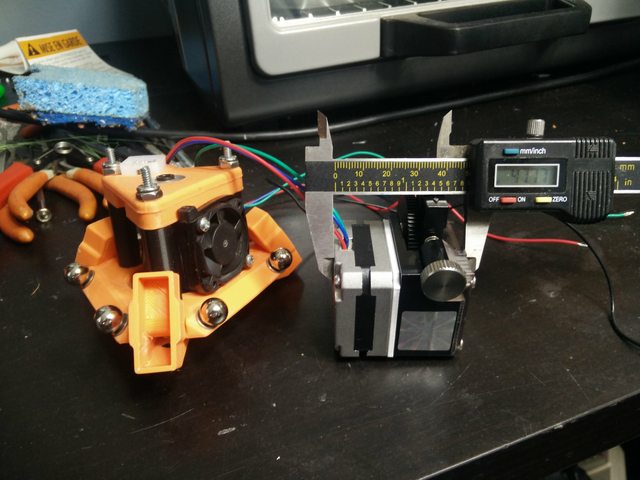 by 626Pilot
It looks nice, but I'm holding out for the Zesty Nimble, which is "remote direct drive." (Stepper on frame, drives a steel cable in a Bowden tube, drive gears on the effector.) Their Kickstarter failed, so they plan to start producing them using 3D printed (powder or SLA, not FDM) parts. Don't know if they will get past negotiating a contract they can both feel good about, but I hope they can. (Nor do I have any inside information on how that's going.) The Nimble's drive section is small enough that you can fit more than one on an effector. It is also breech-loading, and weighs far less than a Titan.

by Polygonhell
I used a micro extruder like this http://reprap.org/wiki/Ultibots/Micro_Extruder direct drive on my V1 or a while. It's a bit lighter than the E3D + Pancake stepper.
I think it probably still had the original arms on it when I tried it, there was enough slop in the system that you could see a slight increase in ringing at fast direction transitions, it wasn't bad overall, but I've never really had an issue with the Bowden setup, and I ended up swapping back.

by Zesty_Lykle
If you have the parts, why not try it?
Just a matter of printing an adapter to hold the Titan and give it a go. I would reduce your acceleration and jerk values.
It would be very interesting to see what the results of the combination is, in print speed and quality. But of course I am biased, you should use a Nimble.

And 626, yes it is happening, waiting for the legal forms to be completed and the company formed. Then we will start selling Nimbles.
Indeed, SLS printed housing, but inj. molded gears and a custom hobbed wheel. I am working on a few extra's like custom bodies etc, but mainly the standard Nimble is small enough to fit anywhere.

by MrBaz
I'm running the Titan extruder with a 0.9 degree pancake direct drive on my delta with no problems thus far. It has greatly improved my printing quality. I'll take pictures tomorrow.