by neurascenic
I have my towers squared to the bed, and top platform. now I notice a slight twist when comparing one tower to another.

I have attempted to adjust this by adjusting the screws slightly, Don't want to tighten or loosen anything too much though. And still it is off by about 5 mil.
The only thing I can think to do is to try to shim the towers in the tri-Supports. It really has to be the the tri-supports that are causing it, As I did notice it before getting the top on, I just thought I had it out before I squared everything up... but back it came. 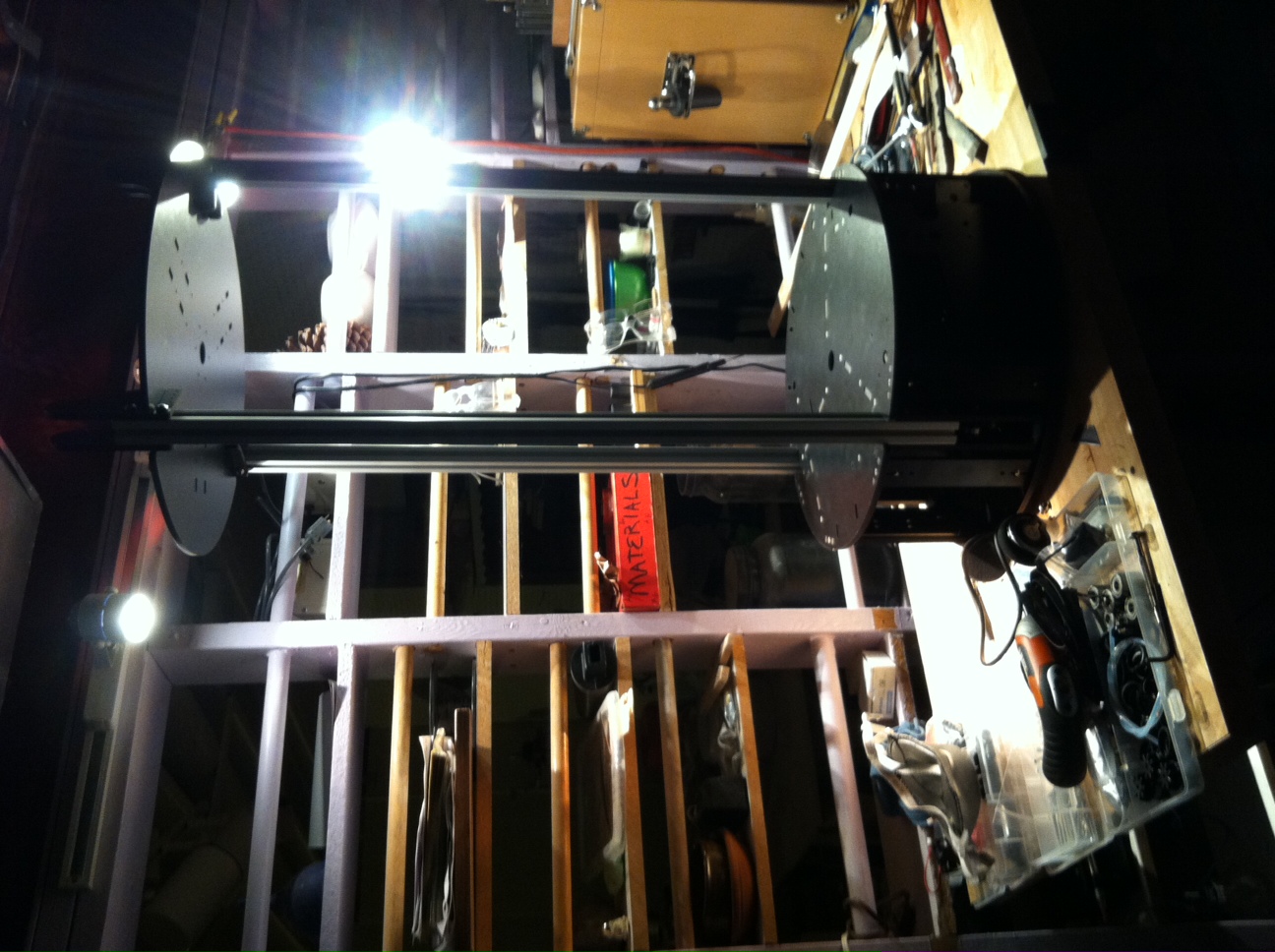 The only thing I can think of, is to Shim the towers in the triSupports to remove the torsion.

Any other Ideas? Hopefully better, as I don't know if shimming it would through anything else off.

BTW, I did search for the same problem, something similar was there, but the purported cause, does not look to be the same. They mentioned that some tabs were too long, and needed to be sanded. I don't have any tabs that are too long. Several that were too short, but the direction that they were facing, should also not be an issue.

by bubbasnow
maybe pull the t slot off and set them side by side on a big flat surface, verify any twisting and bending.

as a noob, I need to clarify; you mean to verify the towers them selves don't have issues?

by neurascenic
Ok, will do. Though i suspect that I did not check well enough the laser cut parts. I did com pair the parts of the tri-supports, and those looked good... But I only eyeballed them. Did not use an obstruction (gleened the technique from another post.). So I probably did to get a perfect read on them. Also, I failed to alight the tip plates and the base plates with the obstruction. What I am seeing, makes perfect sense how the towers are being affectd.


I am worried now, that if I disassemble it, I will need a full new melamine kit. In my zeal to level everything, I was trying to adjust the screws. It worked to a point. But did a little crushing of the t-slots for the nuts.

it is stable and solid now, but when I disassemble it, I bet I won't be able to fasten it down again and it remain so.

As much as I would love to point the finger, Alas, I cannot.

Any way, I will pull the towers, and start there, if they are true, then crap!

by Toyguy
I wouldn't think it necessary to disassemble the whole thing. If it comes to it, I would disassemble the top plate and remove the towers. Check the towers for straightness and lack of twist. While they are off, verify that the top deck of the bottom section is flat in all directions. If not, then you will have to disassemble to find the bad internal pieces. If it looks good, you should be OK leaving the base all together. Also, while they are off, align the top and upper deck plates and find the best possible match on the notches, rotating the top plate around, then assemble them in that alignment.

by neurascenic
I will look at it tonight. Disassemble only as far as I appear I need to go. unfortunately, I am going to be out of touch tomorrow and possibly Sat and Sun. Hopefully I can get it resolved without needing replacement parts.

Thank you very much for the direction! I need it.

by neurascenic
So. I pulled the towers from the base, There is a slight deviation in two of the towers. if I take them and set both convex portions against each other, the gap is at or less than 1 mil.

This does not account for the deviation that I am seeing when assembled.

My bed does have a little warble in it. Yet again, I do not think this is the cause. here is why.

I aligned the top plate with the Bed plate, they seemed to be dead on. I even did it with the towers in place so that I could get a better registration than I did last time
Towers are installed, I push the top up and into position. Square everything to the inside face of the towers and the bed.

attempt to square the towers to the bed at 90º to the inside face. all 3 towers have at least 1/8" deviation over 24" (length of my framing square) and all of them in the same direction.

Has anybody else tried to square in that direction? I wonder if those who have had permenent caibration issues, may have the same issues. If I can't get this square, there is no way I am going to get a decent print.

Seriously need ideas on how to correct this! Or do I get a new melamine kit?

thank you very much!

by sandy
This is similar to the problem I think I'm having. I did get a new melamine kit from Tricklaser - I still can't get a decent print. I'm considering getting new tower rails. But, I don't know where to get them from.

sandy wrote:This is similar to the problem I think I'm having. I did get a new melamine kit from Tricklaser - I still can't get a decent print. I'm considering getting new tower rails. But, I don't know where to get them from.

Misumi USA also sells extrusions but I think they have only metric, I may be mistaken on that.

by neurascenic
I rotated my towers so the slight bend was facing out. (concave in) and it did not make any noticable difference. In fact, I was still able to square the insides (the bends are towards the ends)..

So, I am 96% sure that the issue is in my base. Problem is, I cannot tell what. All like pieces were like. the only thing I can think of is that at least one of the pieces within a tri-support does not align.

I have some 1/2" Aluminum plate, that I am thinking about CNC plasma cutting. Only thing is, I am not sure that a plasma cutter is going to be an better than a laser cutter. though, I am thinking of flipping the smaller paralell on the platten (if it isn't already, as I have not checked) to try to get the draft in the kerf to counter that in the other paralell piece.

Of course, I was hoping to use this aluminum for something else and will be very disapointed if I am forced to use it here.

I have contacted SeemeCNC, but, Holiday weekend and all...

I think I figured out what was throwing this all off.

Big Caveat here, I am not 100% on this, though I strongly suspect this to be the case.

After attempting to install and reinstall the towers/ disassemble the base and rebuild multiple times SeeMeCNC sent me a replacement Melamine kit. This not knowing where the fault lay. (I think I did more harm by trying to "adjust" the twist out by tightening and loosening screws)
Truly, these are good people and deserve my respect. I intend to honor them with the best build I can muster... then extoll, brag and push their product!

In this build, I took a small square and checked as I built

Ostensibly, the culprit: 3.5 of the Cover Brackets have a tab that is oversized. Compare the 3 following images

When installed with the etched text orientated like Gene's manual, text out and down,

This forced a rotation in the top plate which translated into into the other components.
The image below is pre fastened, so is probably exaggerated compared to final assembly, but when multiple of them are orientated in the same direction, I think it to have an accumulated effect.

Using a needle file, I took down the excess

After the top is installed

So... net result, things feel better. But the proof in the bread pudding will come tonight when I install and square the towers.
I haven't gotten around to it yet, but I want to check the cut files to see if there is the slight difference there, or if it manifests itself in the process.