Why printrboard: no soldering, no hassle, cross platform compatibility, SD card slot is always a plus (Makerbots have those and they are morbidly expensive), and easy to work with.


Hardware Mounting Tutorial: This will be posted once I finish my H-1 and order my Printrboard & NEMA 17's.


Wiring Tutorial: Instead of a big tutorial with multiple steps, I created a clean/crisp wiring diagram for the Extrude3D/Reprap/Makerbot Community to use and follow. 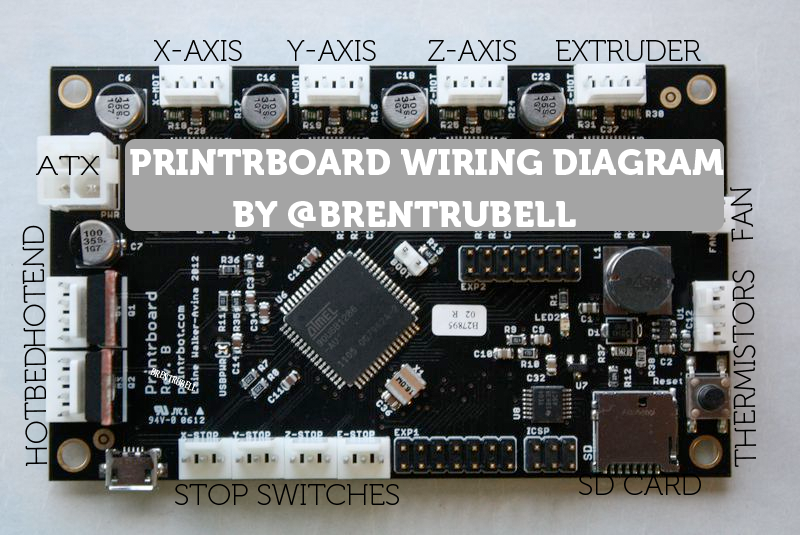 Software Tutorial: I use a Macbook Pro i7, so we will be using the mac versions of Prontrface (http://koti.kapsi.fi/~kliment/printrun/) and Replicator G.

Step 1: Find/Design a .stl file (Thingiverse/Google Sketchup) and save it to your desktop.

Step 3: Open Prontrface and import your G-Code from ReplicatorG.

Step 4: Center all motors and heat extruder (and heated bed if you have one) for 3-4 minutes

The print should now start on your H-1, way less steps and difficulties than MACH3. It was also easier to wire than the normal driver board.

Extrude, John here. The toolchain you posted is very similar to a mach setup. If you switch pronterface for mach, and slic3r for repg, its the same thing. Actually, its easier. With any ardy based setup, you have to recompile and upload firmware when you want to adjust say your steps per mm, accel settings, pinout config etc... And, as of now, you have to find and use old arduino IDE software, which is hidden, since the ardy crowd has adopted newer versions. In mach, you simply open up a config screen and make the changes, thats it. Now, that said, I can do it both ways, but the majority of noobs would find the recoding of firmwares etc... a bit daunting. For the purists, the ardy, printrboard etc... is the way to go, but it isnt any easier, and if youre a hobby/home cnc type, its usually harder. Also, skeinforge, which we started with, can take dozens of attempts to get a recognizeable print. Slic3r on the otherhand, if you have a halfway calibrated machine, you can get print #1 to look pretty decent.

Now, if you want an allinone ardyish interface, I suggest you look at repetier-host. You can bring in the stl, or multiples, tweak your slic3r settings, and control your machine all from that one software, not to mention get an awesome visualization of your print before you hit go.
Top

To add to John's comment about Repetier. Repetier Host/Firmware has a great feature that loads all printer values/settings into EEPROM. Making adjustments to settings is easy, the host software allows you to adjust and upload without having to compile or recompile Repetier Firmware.

I have used this feature to tweak my H-1. Initially I disabled the EEPROM feature, looking back I don't know why, but now I have it enabled and can make adjustments on the fly!
Mike Latif
H-1 #3
Top

Can you better explain it?
-Extrude3D/Brent
Top

Extrude, RepG is similar to repetier, in that you can import an .stl file, manipulate it (like rotating it, scaling it, moving it on your table etc...), slice the stl (which makes gcode), and then control (print) your machine directly within it. Repetier is in my opinion leaps ahead of repG in terms of a fit/finished look, still has bugs though. Also, repG uses skeinforge to slice, which has too many options and too steep a leaqrning curve in my opinion, where repetier uses slic3r, which is sooooooooooooooooooooooooooooooooooooooooooooooooo much simpler to use.
Top

I've 'heard' some say that the 16 MHZ AMD processor boards can't do the fine PWM that a desktop computer can but I would think that the latency of a desktop OS would offset the desktop's faster clock cycles, etc. so I'm keeping an open mind. Comments on the internet smell like a religious war and I was hoping someone would provide an unbiased opinion. An unbiased comparison would be great but we'd need to find someone (or a small group) that uses both. Maybe that's for another time, but your thoughts would be appreciated.

zaphod wrote:Extrude3D,
Thank you for the printrboard tutorial. I'm using the stock H-1 driver board which requires a PC parallel port interface and I'm using the LinuxCNC (formally known as EMC2) to drive it. The Printrboard looks very nice and I like the small form factor. Does it require a separate computer to run ReplicatorG?

ReplicatorG is a normal program that you can run from the desktop. It is used instead of EMC2 or MACH3.

Also, is Prontrface a front-end program that runs on a separate computer that accesses the printrboard or do you send the G-codes to the printrboard via the SD card (I see no ethernet/USB/serial interfaces on the printrboard unless those are the unmarked header pins)?

Printrboard has a mini/micro usb port. You can also use Prontrface -> SD via a button on the software.
*USB Port is on the bottom left hand corner by the way

I've 'heard' some say that the 16 MHZ AMD processor boards can't do the fine PWM that a desktop computer can but I would think that the latency of a desktop OS would offset the desktop's faster clock cycles, etc. so I'm keeping an open mind. Comments on the internet smell like a religious war and I was hoping someone would provide an unbiased opinion. An unbiased comparison would be great but we'd need to find someone (or a small group) that uses both. Maybe that's for another time, but your thoughts would be appreciated.

I am not sure what you are talking about, the computer or the board itself?
-Extrude3D/Brent
Top

Extrude3D,
Thank you for the reply.

Now I see the USB port! Hard to identify it from the top view

On the other part about the speeds of the processor, etc., I'm talking about the device that implements the Pulse Width Modulation (PWM) that drives the stepper motors. When stepper motors are 'stepped' a full step they normally turn 1.8 degrees. This is 200 steps per revolution. Sure they make other types of steppers but the 200 steps per revolution is the most common. Depending on your particular design in your machine, a 1.8 degree step can be pretty big (if you have no or little gearing). On my H1 for example, the stepper motors directly drive belts for both the X and Y axis with no gear reduction. A 1.8 degree step would mean the positioning of the X and Y axis would be rather crude. Luckily we can drive the steppers using half-stepping also. When half-stepping the driver board energizes both the A and the B coils of the stepper motor simultaneously and the motor goes 1/2 way between the two full steps, hence half-stepping. So this gives us twice the resolution as full stepping which is pretty good. Now, we can go even better if we use PWM on the steps. To implement PWM, at a very fast rate we turn on and off the A and B coils. Lets say we are on the A step and the B coil is off and the A coil is fully on. We can take a 'micro-step' if we very quickly pulse the A coil on and off but we mostly keep it on, say 15/16ths of the time A coil is on and 1/16th of the time A is off. Simultaneously we very quickly pulse the B coil also so that 1/16th of the time the B coil is on and 15/16th of the time it is off. We have just taken a 1/16th micro step. To make these PWMs 'smooth' the ONs and OFFs are perfomred VERY quickly - a lot faster than just 16 times as fast as say a full step.

In the H1 stock stepper motor driver there isn't a nice microcontroller that's handling the fast PWM for the steppers. What device is doing this? It is the PC (in my case) running linux. Now my 2 GHz PC is very fast compared to the printrboard's 16 MHz microcontroller, however, the printrboard's microcontroller has rather little else to do and has fast context switching and interupt handling and has PWM built into its hardware, whereas the PWM in the LinuxCNC software has to get the operating systems attention to accomplish anything and the OS is often busy with so many other tasks like performing memory swapping, talking to the hard disk, answering the internet where someone is trying to port sniff, and what the heck? some one just moved the mouse and exposed a widow that I now have to fill in and Now What?! Some LinuxCNC application wants me to toggle my bits on the parallel port.... (the LinuxCNC application gets no respect from the OS). When all is said and done, the very fast PC just might not have enough umph and fast context switching in order to implement the PWM signals in software smoothly enough. In the LinuxCNC program there is a utility that helps you measure how long your PC takes to toggle the port pins and will tell you whether the PC is good enough or just too damn slow.

If I were a betting man I would place my money on a microcontroller board like the printrboard to implement smoother microstepping than my PC, however, I went with the stock H1 which implements in the PC's software and I've seen prints from others that look great so I'm not throwing stones. On other forrums I've seen people saying bad things about the microcontroller based driver boards but I couldn't tell if they were just biased against them or had real technical points. Since the printrboard and the H1 stock driver boards are the two opposite design approaches as to the PWM signals, I was hoping to see if we could take a biased look at the pros/cons of the methods and determine if my next machine should be a printrboard-like approach or a H1 stock driver-like approach.

I hope I have not rambled on and on about stuff you already knew, I just wanted to be sure an explained my question without assumptions.
Thanks,
Z
Top

Wow, quite a writeup Zaphod. I never knew any of that information seeing as I am not too advanced with 3D Printers yet. I think that the Printrboard is the best shot the SeeMeCNC has at full (almost post-pc) control over our printers.
-Extrude3D/Brent
Top

It's nice to know that the Printrboard works well on mac, Extrude3D.

How ever, I can't pass the stage of being able to connect the printer to the computer. It just doesn't recognise it.